The Sum of the Parts: Stephanie Lake speaks with Urszula Dawkins about DUAL

Would it be possible to create two solos, then ‘lock’ them together in a duet? And to lock together not just movement, but light and sound as well? This was the question Stephanie Lake asked herself, then set about answering, in creating her much-anticipated new work, DUAL. 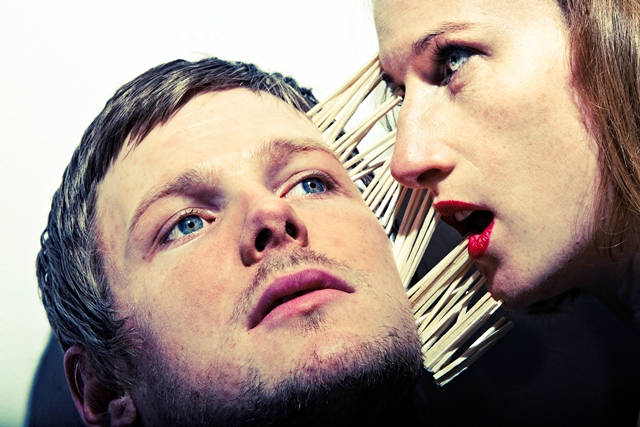 The idea for DUAL first came to Lake around two years ago, as a formal construct: a work in three parts that would chart the gradual melding of two performers.

“I imagined a work in which there’s one solo followed by another, that appears unrelated – describing the physical idiosyncrasies of each of the dancers,” Lake says. “But in a third act, those two seemingly separate solos ‘click’ together and are performed concurrently, forming a duet.”

“It seemed like a structural framework that had the potential to say interesting things about individuality and union.”

Lake describes herself as responding well to set parameters, saying that although she couldn’t have predicted the outcome, she stuck to the simple structure.

“The appeal of a choreographic framework like this is that it opens up huge scope for invention and detail within it. I have remained true to the original idea but tried to come at ways of creating the micro material in a whole range of ways.”

The “micro material” from which the work is constructed turns out to be both fluid and fraught, against a soundscape that is by turns surging and metronomic.

“The interesting thing about this process has been watching as the character of the work has begun to unfold. The premise may sound dry, but the ways in which the dancers intersect, combine, clash and meld bring the work to life.”

Lake describes DUAL as “a choreographic puzzle that fuses jagged yet slippery pieces”. It’s a physical manifestation, she says, of the idea that the sum is greater than the individual parts.

“1 + 1 doesn’t necessarily equal 2. My hope has been to create something that transcends the simple structure and says something about what it means when we intertwine with another person.”

‘Intertwining’, in Lake’s choreography, doesn’t just imply romantic attachment – her stunning Mix Tape, for instance, created for Chunky Move in 2010, illustrates a complex and nuanced notion of bodies working together, connecting and disconnecting, both intimate and separate. DUAL, too, presents an intertwining that’s complex, perhaps even conflicted.

“I think DUAL could be read in many ways. Perhaps it could be read as seeing one side of the story, and then the other. And then finally seeing the truth.”

“But in essence this is an abstract work…a choreographic exercise that may lead the viewer through a web of associations.”

“Each solo has a strange sense of absence – but also holds its own abstract logic,” she says.

Coming together for the final act, the dancers seem at times to be at odds: an arrhythmic heartbeat clashing with synched-up bodies; symbiosis and codependency seemingly within a breath of one another. And the title, of course, is just barely removed from the notion of a ‘duel’.

But although either title might have worked, ‘dual’, says Lake, was more open-ended.

“I didn’t want the audience to be expecting to see some sort of dance ‘battle’ or anything of a competitive nature. The beautiful thing about the work is the unexpected way in which the solos interlock. It’s not combative – if anything the combination of solos makes the dance stronger.”

Lake’s notes for DUAL describe a “chemical reaction” at the point where her dancers – Alisdair Macindoe and Sara Black – meet on the stage. “We find ourselves in a new psychological space, revealing that what appeared separate does, in fact, belong together.”

It’s a theme that resonates across all Lake’s work thus far.

“I have always had an interest in movement invention, partnering, rhythmic interplay, chaos and control. This may be my most abstracted, least theatrical work to date, though.”

“I guess you could say that I have an interest in the organisation of humans – the dynamics of interaction and the tension that is born of trying to share our lives with other, equally complicated human beings – the forces of unity and discord.”