A section of rectangular floor-space is studded with low swivel stools. On each stool sits an audience member, expectant, watchful. There is no centre, only parallel lines, an implied warp and weft. Overhead is the grand vaulted ceiling of the New York Public Library. When the dancers appear, everyone swivels spontaneously in the direction of their movements, adjusting their point of view to the action.

‘Point of view’ is often abbreviated to ‘P.O.V.’. And it was director/choreographer Lee Serle’s own point of view, from a rooftop in New York, that inspired the form of the eponymous dance piece, shown in development there and now premiering at Dance Massive 2013. Serle, participating in the prestigious Rolex Mentor and Protégé Arts Initiative in 2010–11, spent a year in New York mentored by revered contemporary dance pioneer Trisha Brown, and working with her company. During that time, looking down at the busy criss-cross of streets, he decided to use the city grid as the central framework for a piece he would create for Rolex’s New York Arts Weekend. The grid reminded him of Melbourne, Serle says. He also wanted to experiment with making the audience part of the set – an idea that worked well with the grid, resonating with the notion of a densely peopled city.

In P.O.V., the dancers and audience effectively share the same space. “If we were to slow down our lifestyles in an imagined world,” says Serle, “…if we were to connect with the people that we pass every day or the things that we pass, what might that look like? What could those interactions be?”

Serle wanted to ask the audience to participate more, bringing them closer to the performance. “…Because being in New York, the busy lifestyle…everybody’s rushing round from one place to the next and they’re not really paying much attention to who or what surrounds them. So I wanted to bring that into the work.”

At the beginning of P.O.V., says Serle, the movement is about getting from A to B. But over time, the intention shifts, from self-contained and abstract movement to closer proximity; the dancers interacting as people, rather than performers, with the audience. 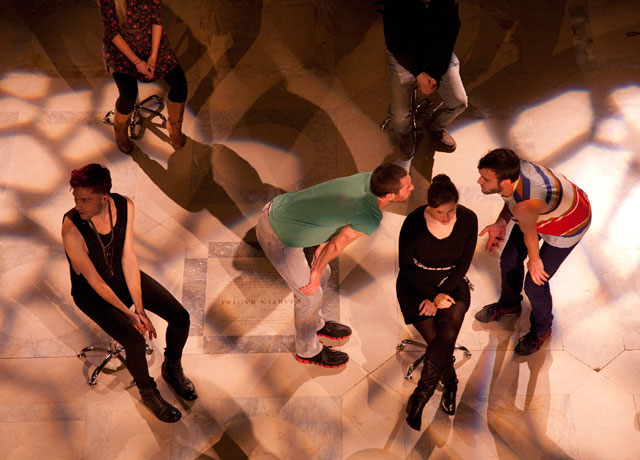 “I wanted to approach each interaction and each audience member with the comfort of going, ‘We’re actually in this together and you’re not really having to do much when you’re participating in this. It’s like – we are doing the work and you’re just observing it close-up, and this is for you’.”

Working with one of the world’s pivotal dance creators, and being immersed in a seminal body of choreographic work that spans many decades, has been significant in Serle’s transition from dancer to choreographer, he says, both ‘bridging the gap’ and ‘throwing him in the deep end’. P.O.V. is very much a product of his work with the Trisha Brown company, he says. “It’s absolutely reflective of that time and place”.

“I’d been doing only Trisha Brown repertoire and choreography for that whole year, so it was still incredibly present in my body when I was choreographing – all those influences were there in the choreography. And the idea of involving the audience more, I think, was inspired by her early works – gallery performances that I’d been doing with the Trisha Brown company, and the negotiation of people and space.”

Like all art forms, dance has a ‘family tree’ of lineages; and perhaps in dance – with its hands-on process of choreography, and its storing of movement in the body – the significance of these lineages intensifies. Serle articulates the qualities of Trisha Brown’s work that have influenced contemporary choreography so profoundly, including his own:

“[She] pioneered a much more pedestrian way of moving and the use of weight and gravity and falling and all those kinds of locomotive things we do as humans naturally; and she developed those into dance choreography… A lot of it’s very free-flowing; it doesn’t have that kind of ‘holding shapes’ and positions and real kind of muscularity that a lot of [earlier] modern dance had… There’s a sense of weightlessness about her choreography.”

“If you were to show a phrase of [Brown’s] dance, you’d really notice the use of momentum and falling into the next movement, but then catching and then falling back out of it in a different direction and constantly shifting the initiation point… Definitely one of the biggest things [about her work] is the sense of weight and momentum in her movements.”

As Serle extends his own choreographic work, one of the themes that tends to recur, he says, is the idea of recurrence itself: “constant repetition of a movement over and over in order to find a new beginning somewhere.”

“Visually, when you watch a movement repeated, what it shows you in the beginning is very different to what it shows at the end of that cycle of repetition. I might do a repetitive movement over and over and over again, but then it will lead me into something else, which I may not have come to unless I’d gone through that process.”

“I may not even show the repetition – I may just scrap that. But the movement that came afterwards was informed by that repetition, [even if] the audience doesn’t see it.”

Arts House’s North Melbourne Town Hall is a more intimate venue than the cavernous New York Public Library, but one that Serle finds fitting for P.O.V., with a sense of ‘public space’ that he feels is logical for the work. The point of view shifts, from the grid-locked streets of the high-rise metropolis to the more familiar grid of Melbourne: a diverse, arts-rich city, but one more intimate, perhaps, than the Big City. And a place, too, where one might more easily swivel 90 degrees and find themselves dancing with a stranger, or hearing a whisper, or just the rush of air as a dancer swishes by…