Conversation Piece brings together three actors and three dancers in a work that is never the same twice: at the start of each performance, a completely spontaneous eight-minute conversation takes place, which is recorded, repeated, and becomes the framework for the dance. Lucy Guerin spoke with us about how she created this unique encounter between art forms. 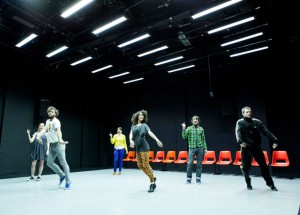 Firstly, what was the inspiration for Conversation Piece?

The inspiration was really the bringing together of these performing modes – acting and dancing… I wanted to explore how they inform each other and how they limit each other, and also how dance exists outside of language.

The idea for the work was really very general. It was the process of rehearsal that really gave it shape and content.

Can you describe that process?

I was invited to do a three-week development in 2011 with Belvoir St Theatre and I chose to work with three actors and three dancers. Many of my works over the last few years have been inspired by how dance communicates and how that communication differs from language. I thought this combination of performers would be an ideal opportunity to experiment with this idea.

With Conversation Piece I really wanted to let the content of the work emerge from the coming together of this group of people and the meeting of these two forms. This was exciting but also quite daunting, and many times I really wondered if anything would happen. So we began the process just playing with crossovers between language and dance – for example ‘dancing to language’ or ‘speaking about dancing’. But at a certain point it became a frustration that we didn’t have any words for the actors to say.

I didn’t want to work with a script, as I felt that would give too much importance to the words and lose the naturalness and spontaneity of the group. So the eight-minute conversation was born – which did not need to say anything particularly meaningful, but was rather about the act of communication itself and was consciously disposable.

Initially we just used our iPhones to record these conversations in rehearsal – but then they began to assume an important role in the piece. We recorded our voices on them and used them to play music on. Why not create most of the technical aspects of the piece with them?

Creating a work from a random conversation each night sounds risky! What have been the biggest challenges?

The biggest challenge for me is that I can’t control what will happen on stage; but this is also the greatest pleasure. I never tire of watching this work – not only is the conversation and therefore the content different each night, there are [also] strange links created between the text and movement that will never happen again.

There’s an echo in Conversation Piece of the way your earlier work, Untrained, operated: the performers coming from different sides of the fence, as it were. What attracts you about this kind of connection across borders?

I have for many years been asking myself – and others – the question, ‘What does dance communicate?’. Most of us understand spoken or written language; but dance often creates confusion for people, as they don’t know what they should be getting from it when they watch it. They don’t know what it means.

My belief is that actually they do know, but because they try to understand dance through a linguistic filter, it doesn’t make sense. It’s partly this slippage between watching movement and translating it into words that draws me to working with text and movement.

…Sometimes it is just a moving body, and that is delightful to watch – it doesn’t need a reason… I think I am engaged by a dialogue between forms or ideas rather than resolved conclusions. So when two or more elements of a work can be in ‘discussion’, that’s when I get excited.