FUTURE PERFECT brings together some of Melbourne’s finest performers and creatives, compellingly exploring circumstance, transitions and the unknown. Choreographer/Director Jo Lloyd joined us for a Massive Chat ahead of Dance Massive’s season of her rigorous, shimmering and intricate work. 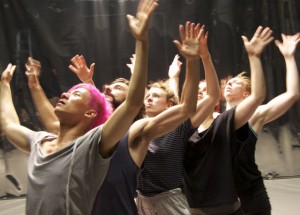 When did you first have the idea to create FUTURE PERFECT?

I had the initial ideas for the work in early 2009, though I was interested in the term FUTURE PERFECT about ten years prior to this, when it was used in a romantic conversation! It has always been a powerful coupling of words for me; both [these] grand words individually and together suggesting such a grand idea, with such certainty about the unknown. It followed on from an ongoing interest of mine, in shifts in perception in relation to particular events and the bystander effect.

My work Apparently That’s What Happened (Arts House, 2008) focused on how a group of people can recall the same event very differently. With FUTURE PERFECT I was flipping the focus, and rather than only recalling experiences, I was also interested in the approach.

What were the ideas you found yourself exploring in the work?

I had the desire to work on rhythmic sections of choreography that morphed over time without clear transitions – the idea of something changing without this change being initially evident. I was also interested in creating sections for the work that were beautiful; and in the idea of perfection. I had been making a work which was quite the opposite – the movement material exposed the ugly – and I was interested in contrasting the two. I also looked at different ways people perceive the future; how people choose to approach, cope and respond to events and [the] possibilities of false arrival.

Can you describe the creative process? A day in the studio?

I worked with all the creatives from the very start – I intentionally wanted to involve them in the work from day one, to allow us to all respond to the same stimulus and share ideas and creative responses. The worked was created over several development periods and they varied in terms of the choreographic process: I shifted between creating very set, detailed sections, to extracting ideas and sequences from extensive group improvisations. A day in the studio sometimes would begin with me listing off the ideas I wanted to try and not knowing which to go with first!

The sound for the piece is very rich and evocative – could you tell us a bit about Duane Morrison’s contribution to FUTURE PERFECT?

Duane and I have worked together since 2002 and we have developed various modes of working. We continue to pursue methods that produce exciting material, and we trial new ideas. Duane’s music for FUTURE PERFECT came about through a combination of processes. We spoke of one section working like a storm approaching, building and passing. We also recorded the dancers responding to improvisations, and these recollections would then be processed and used in the sound, often forming looping rhythms. Duane is able to create such varying pieces of music, and this work exposes that.

Can you tell us a bit about Rhian Hinkley’s work for the piece?

I was keen for the collaborators to bring their current interests to the process and, at the time, Rhian was exploring the capture and display of three-dimensional forms. His contribution responds specifically to one of Duane’s tracks; and echoes several of the initial ideas of things morphing slowly over time and individuals responding differently to particular events.

What would you like an audience member to have in their mind or their heart when they come to see FUTURE PERFECT?

Be open to the experience, relax and allow yourself time to sit, think, and respond.