Atlanta Eke’s intense and honest Monster Body provoked strong responses when she first performed it at last year’s Next Wave festival. We asked Atlanta a few questions by email about Monster Body, and received this eye-opening ‘postcard from Jan Juc’ in reply. 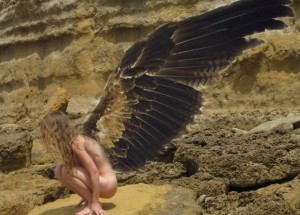 Firstly, where did the idea for Monster Body originate?

I am sitting in an almost empty café in Jan Juc, and Metallica – the band – has just walked in. It seems they are having some lunch before going surfing.

Um. I can’t remember anything.

Death Magnetic. This was not such a good album.

I am thinking a lot about what to do right now. Look, don’t look, listen – yes – be cool or not. I am in this café all the time, but now I am confronted with a situation where I am consciously noticing myself in relation to the four rather tired-looking, frizzy-haired rock stars.

Maybe this is the affect I am going for with Monster Body: eliciting a conscious noticing of oneself and one’s behaviours and relations to others inside the familiar space that is the theatre, as well as feeling a weird buzz. (It’s fun to do coffee next to Metallica.) People enter the theatre confronted with the fact that they are there sharing the space with me in real time. The performance is not separate from the audience.

Monster Body has come along way from its original inspirations… In 2009 I was reading a book by Georges Didi-Huberman titled The Invention of Hysteria, which explicitly examines monstrous expression in the image of the female body in the context of performance… As the process [of making the work] evolved, my interests shifted toward more contemporary times. Monster Body is the result of a series of experiments concerned with how to utilise the subtlety and physicality of the dancing body, to broaden the representation of the female body in our society today. It is very presentational in that sense.

What are the ideas you wanted to explore in the work?

The audience and me, we are the magnets, attracted to or repelled by each other. We are the material or objects that produce the magnetic field.

This magnetic field – it’s our relationship. It’s how we know how to relate to each other, based on the properties that constitute us. I’m interested in death: the death of these properties, these learnt behaviours; the death of these power relationships constructed by the conventions of the theatre – the audience member subordinated, tucked safely away in the darkness of the seating bank to objectify the body of the virtuosic dancer…

Death is the loss of knowing how to be in this relationship. It is a death of the invisible force that determines conventionalised audience/performer relations…

Death as transformation. Creating a new invisible field of attraction.

Hmmmm. Or maybe it’s just more like [Metallica’s] Master of the Puppets.

Regardless of Metallica, I wanted to use Monster Body as imaginative force of production. I wanted to explore a political imagination and for the theatre to be a place where this imagination happened collectively, where we could all work together to create different kinds of futures.

What themes are you drawn to again and again?

When making a performance I work to lose something of myself, to take risks, to change, to alter my understanding of the world. When considering the context of its presentation I work to set up a situation where there is a possibility for the audience to lose something of themselves. I do not enlighten or empower the audience but simply offer a space where something else can happen. There is trauma, but mostly felt on my behalf.

How did participating in the Deborah Hay Solo Performance Commissioning Project influence your own process of creating work?

I worked with Deborah in 2009 and again in 2010, on a solo titled In The Dark. In this solo she gave me an instruction: “Become Monster without revealing Monster”. I spent many weeks working within Hay’s practice to ‘become Monster’. This was very fun and [was] one of the instigators for a deep exploration into the concept of ‘Monster’.

Deborah Hay’s performance practice and her poetic radicalism is a continual de-codification of ingrained conditionings; an ongoing questioning and deconstruction of inscribed codes of dance and performance. Upon meeting her in 2007 she reconfigured my perception of the capacities of what dance can be. So yes, I love her and when I have worked with her she comes to the studio with huge generosity and rare intelligence.

Are you influenced by genres like performance art? What do you find interesting in forms that stretch the boundaries of ‘contemporary dance’?

I am interested in expanding the capacity of what dance and choreography can be. I think dance is so regularly associated with entertainment. Audiences are saturated with spectacular feats of virtuosic skill. They get bored with this and always want something a little bit…more. Dance is more than this. It is just a matter of thinking through the artwork instead of displaying physical feats.

What kind of audience experience would you like to provoke with Monster Body?

I guess one that Metallica might provoke. A completely mind-blowing and electrifying experience. If an audience member cannot necessarily formulate their thoughts into sensical statements after seeing my work…this is generally good.