What do a nurse smoking on a tea break and a man with objects falling all around him have in common? Read our Massive Chat with Ashley Dyer to find out this and more about his surreally smoky Life Support, and how objects can become figures in the choreography… 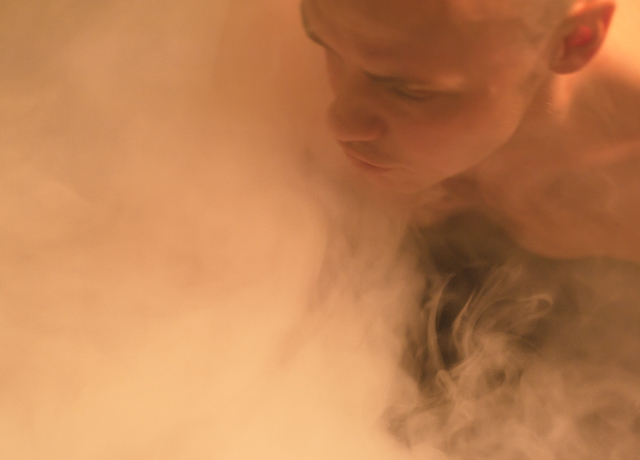 What was it that first inspired you to create Life Support? Why did you want to make this work?

It’s difficult to pin inspiration down to any singular thing. I think that everything I’ve made, or tried to make and failed, has been about something similar at its core. How do I deal with this thing called living? What makes me or anyone keep going? And not necessarily in a negative sense, either. There’s magic in the will to live.

There are the tangible things…like a friend passing away from cystic fibrosis… When my friend was born he was only expected to live till he was 20. He lived to 28, constantly reminded about his mortality. He spent a lot of his life waiting: waiting in hospitals, waiting with this thing always present.

Or there’s the slow creep of climate change, and its threat to everyone. How its presence as a problem seems to be being ignored, or sidelined by society… People have a lot of goodwill towards the environment, but when faced with real change [they] struggle… Maybe they feel powerless. I’m not judging people. I’m just noticing. I’m also culpable.

And then there’s the beautiful in the everyday. And the question of how you give space for people to pay attention in a different way. How do you create a space for paying attention to the motion of smoke, for instance? …I think the work has a good balance between the natural and the man-made. I hope it makes people think wonderfully and dreadfully about those two things.

There are the less tangible things too. You make the work that you can make.

You’ve described Life Support as a sequel to And Then Something Fell On My Head… – can you tell me a bit about that earlier work, and how Life Support follows on from it?

And Then Something Fell on My Head… was a performance that featured thousands of objects all dropped by hand in choreographed patterns, in and around a performer and an audience. It links to this work in a lot of ways… In both we treated an object or phenomenon as a material, kind-of like how a sculpture treats clay. ‘Falling objects’ was a material, and in [Life Support] smoke is a material. How might you bring someone’s attention to movement and/or sound associated with that material? Can those things be choreographed or composed?

Formally, the outcomes are similar too. They are both works that I call ‘Dance Portraits’. These depict solo concocted contemporary archetypes in a changing landscape. Both works are really paintings of movement. The first figure was an everyman, or office worker, or quantitative analyst maybe during the economic crisis; and the second is a smoking nurse on a tea break. The smoking nurse, for me, is a beautifully compromised and juxtaposed image. One that is understood but complicated, and requires resolving. It’s a figure that represents both the shortening and prolonging of life.

As individual works, [And Then Something Fell on My Head… and Life Support] paint flat, hopefully visceral pictures for people to read into and read sideways in time. When those pictures are then placed alongside one another, a line is drawn that connects them; and two or three moments in time become a story with a beginning, a middle and an end.

You’re not only a choreographer/dancer – what has inspired you to develop such a multidisciplinary practice?

I’m not a very good dancer. I’ll be honest about that. Like everything I do, I’ve self-tailored the artist I want to be. I spend a fair bit of time singing, using more conventional, traditional and extra-normal vocal techniques… I don’t know really, though – I don’t see what I do as multi-disciplinary…

I understand others can see it that way, but I just do what I want to do, and try to move more and towards what I want to be doing; but simultaneously always mindful of trying to be a better person… I think that I just need to be learning new things, or I get down. The pleasure of overcoming little personal challenges never ceases to bring me joy.

Last thing: I think it’s really important to mention my collaborators. This work is a massive undertaking and it just wouldn’t have happened if they weren’t there helping me. It’s always strange trying to pin authorship down to one person.