From Set-Top Box to Stage – Sandra Parker’s The Recording

Many an artist has probably berated themselves for time spent in front of the TV when there is work to be done. But for director/choreographer Sandra Parker, “watching way too many episodes of the one series in one night” sparked the idea that allowed her to create The Recording; a new work in which the stage is dynamically transformed into a film set.

Prior to what Parker recalls as one summer’s addiction to the box set, she was exploring the idea of documenting scenarios and trying to recreate the movement, she says.

“For example, pedestrians on the street – and then trying to authentically recreate that material on stage and in film – and playing with the way in which mediatised versions of the same thing can be radically different. [But] I wasn’t finding source material that was working so well for me.”

That spell of off-season TV provided her with the key, though, she says.

“[The] actor movement started to look really compelling as source material. Plus I was interested in making work that was somehow about the process of creating things on stage. I wanted to open up that aspect of performance for the audience.”

The Recording exposes the construction of movement on stage: adding film screens and monitors to the space; exploring repeated interactions and gestures; and bringing cast and crew together to experiment with lighting, atmosphere and variations in scenic intensity.

Film, says Parker, allowed her to explore “the notion of ‘capturing’ and the process of selecting certain aspects of performance to look at”. Camera angles, lighting and sound all create layers that change and manipulate what the viewer perceives, she says.

“Although choreography is a completely different form in a lot of ways, choreographers also go through the process of selecting certain movements, actions or gestures and highlighting them to create the movement on stage. In the same way as a photographer or cinematographer, they attempt to capture a live moment so that it can be repeated over and again.”

The Recording draws its movement vocabulary directly from film and television; the resulting choreography expanding and developing the gestures of screen actors.

“The dancers have watched the actors and tried to learn the physical action and timing of actor movement. Then we’ve developed further for the stage. It’s actually really hard to do – but I wanted to try to present embodied movement that we instinctually recognise and feel comfortable watching.”

Both The Recording and Parker’s earlier work Document (created through Dancehouse’s Housemate residency) reflect on whether a live moment can ever really be recreated.

“I suppose the works are both concerned with the notion of capturing, preserving, reproducing – although Document is about choreography and dance, drawing from old works and more strongly from memory.” 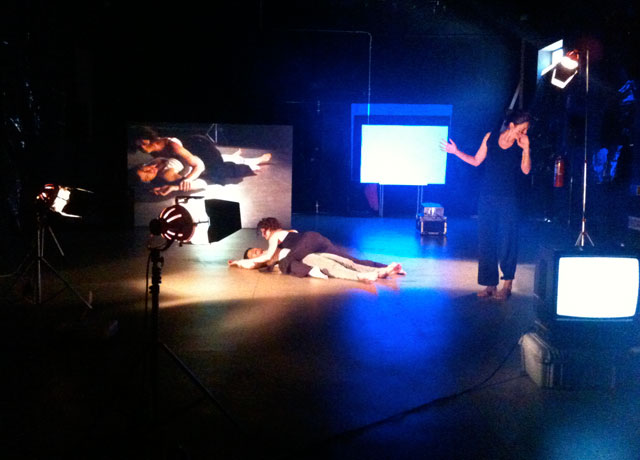 “In Document, the dancer is trying to recapture old choreography from memory; in The Recording, it’s film trying to do it. And in Document, it’s memory that is flawed, that can’t get back to the live moment. In The Recording it’s the process of filmic manipulation that skews the real or live.”

Film and television production generally depends on mapping out as much detail as possible and then doing the shoot. For Parker, her performers, and regular artistic collaborators Jen Hector, Rhian Hinkley and Steve Heather, the development process is much more responsive, moving back and forth between creators until the effect is right.

“Usually I work for a while with the performers and build sections of movement material, then Jen, Rhian and Steve will come in and respond. Often they will come up with an idea that I will then respond to by going away and making movement material that I think will work well… It’s a back-and-forth process until it gels. But I like working in this way because often the elements rub up against each other and the result is something I couldn’t have predicted.”

Parker has been working with Hector, Hinkley and Heather in different combinations over several years now – their first work all together was Out of Light, conceived in 2007 and premiered in 2009.

“Each time we work together we ask more questions about the nature of theatre and performance, and there is always more to explore than we can manage in one project. So it’s a natural progression to keep working together. They are also incredibly generous collaborators and I have great respect for their skills and integrity. It’s great to be in the room together.”