Just like the detritus of 20th-century culture – the high heel, the BMX bike, the baseball bat – the skeleton is an artefact; an object both loaded with unique memories and generic, just like all the others. But in the hands of choreographer/performer Larissa McGowan, the skeleton is anything but lifeless – it flexes, crashes and impacts, embarking on fierce kinetic adventures with others like it.

Larissa McGowan has long been fascinated with the workings of the body as a source of choreographic inspiration. The trigger for Skeleton, she says, was specific, though – a set of sculptural works by Australian artist Ricky Swallow, which took skulls and skeletons and juxtaposed them with objects connected to his life, things like Adidas hoodies, Walkmans and BMX bikes. 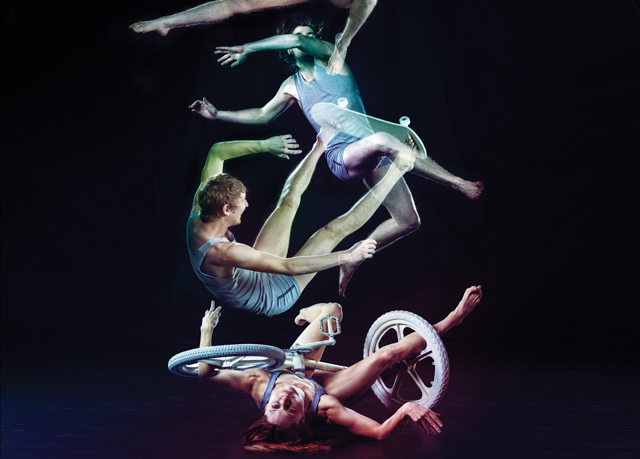 “I was drawn to the idea of how the objects are equal traces from our lives as our own skeleton,” McGowan says. “So [Skeleton] is archaeological in its approach – a series of fragments that are reassembled, trying to put a puzzle back together.”

McGowan addresses the crucial physical element of the skeleton, not just as the vehicle for an idea but also as the idea itself:

“I was fascinated to make a work that would investigate the notion of a skeleton both as its form and content,” she says.

McGowan felt that Ricky Swallow’s work invited her to consider the objects of pop culture more closely as personal artefacts; as traces of who we once were, “in the same way that a skeleton, ultimately, will be for each of us a final trace”.

There are also, perhaps, paradoxical links between the visceral, symbolic, internal physical frame and the relatively ‘disposable’ objects and icons of pop culture, which often seem so meaningless to us.

“There is a juxtaposition between external and internal at play with these ideas,” says McGowan, “but I also think that there is a ‘generic-ness’ and sameness to a skeleton.”

“From first view, [skeletons] all seem fairly similar, much in the way that these popular products are – but they carry all these associations, memories and fantasies connected to the people that they once belonged to.”

McGowan’s fascination with pop culture began with a short solo work she created with theatre director Sam Haren, called Theatrical Trailer for Alien 5; “where I lip-synced and performed to a soundscape based on Sigourney Weaver’s character Ripley from the Alien films.” Excited by the accessibility of creating something “immediately familiar and relatable for an audience, and yet highly abstract in its choreographic palette”, in 2012 she created another pop-culture-inspired work, Fanatic – both a homage to and a satire on fandom and the Alien and Predator films.

While McGowan says the references in Skeleton are from a similar era, the eighties and nineties – the era she grew up in – the aims are quite different from previous works.

“In Fanatic and Theatrical Trailer for Alien 5, the explicit references to the films and the characters frame the whole work. In Skeleton, they are far more fragmented and obscured: at points you might recognise a sound that seems familiar, but you might not be able to place it.”

Skeleton pulses with life, even as it evokes dry bones and long-lost relics; even as rebounding bodies and objects are erased by the work’s sinister ‘vanishing screens’. The nostalgia of the cassette tape mingles with a suggestion of rigor mortis; a constant sense of exploration, resilience and impact infuses the permutations of the dancers’ bodies.

McGowan collaborates again with Sam Haren for Skeleton, this time as co-director. For McGowan, Haren brings a valuable second approach, through the differences in both their creative backgrounds and their personal aesthetics.

“Sam, as a theatre director, has the ability to approach tasking and research of the subject matter in a very different way to how I would in a dance context. This allows me to interpret and create with a large amount of information.”

“The differing approach to reading and assembling work is enhanced by [Sam’s] dramaturgical clarity and questioning of the overall shape of a piece. The process is extremely exciting and engaging, and has progressed my idea of what style of dance I am interested in creating.”

McGowan has a long history of working with Australian Dance Theatre (ADT), a company characterised by its high energy and physicality. While strongly informed by ADT, she describes her style as being fundamentally very different.

“I think I’ve been inspired to create intricate and physically demanding material from my time at ADT, but I would describe my own style as an exploration in the way my body moves: the oddities that make or enhance a performer’s uniqueness.”

“I am extremely excited to surprise the audience by what perceptions we give a body type, and to explore how to find pathways that are not expected.”

If Skeleton is about these artefacts, about ‘the final trace’, what might the trace be that the work itself leaves behind?

“A personal one-off moment in the audience’s memory”, says McGowan. “Each show is live theatre that can never be repeated the same, even with impeccable consistency. Every audience is different and the connection between performer and viewer has a different energy. This is what makes it unique and exciting.”