Dance Screen retrospective 1985–2008 is a 65-minute program of short dance screen works by celebrated Australian choreographer and director Tracie Mitchell. Tracie joined us for the final in our series of Massive Chats… 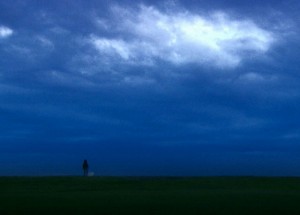 What led you into film as a medium for dance?

Whilst studying dance at Rusden in the late 1970s, I became interested in doing dance in non-theatrical spaces. A dance friend from uni and myself would head off into the city to find laneways etc to ‘dance out’. At first I used a 35mm camera to document these events, but I wanted the pictures to move, so then I started using 8mm and 16mm film to document. Gradually I got interested in how the moving camera could contribute to making the choreography.

What are some of the things you’ve explored in your work, that you couldn’t have done through dance alone?

I am interested in creating works in which the language of filmmaking and of dancemaking are in a creative dialogue with each other… For example the work Chicken explores the interaction of space/place and the moving body. Whole Heart investigates combining narrative and abstract forms in a way that they slip in and out of each other. One of the most important investigations has been in regards to creating an intimacy between the kinaesthetic experience of the performer’s movement and that of the audience.

Is there a common thread running through all the work you’ve created?

For me there are three common threads. I am interested in how to use film in my dance to kinaesthetically connect an audience with the dance. I am curious about how to interconnect narrative and abstract concepts into dance works. And also I approach the screen as a kind of three-dimensional canvas that involves approach to colour and visual composition, as through I am using oil paints.

Under the Weather is longest piece in the program and also the most recent of the films being shown. Can you tell us a bit about it?

The original idea for Under the Weather grew from two experiences. Firstly I was interested in creating solo works in spaces other than dance studios. Also, through the incorporation of film and dance I wanted to explore further the notion of a dance screen work as a series of sensations. To address this I considered the notion of how horror films are created: how through construction, reaction is created.

What are you working on now?

I have just finished my PhD about making dance screen work, and am also writing a chapter for an Oxford publication about dance screen making. After such a long time writing I feel like I am on a bridge and moving forward into the next stage of development in making art. As a young artist I couldn’t wait to get into the latter part of my art-making, as I always desired to have a body of knowledge that had come from my own experience; that I would be able to reflect upon in order to find new ways of thinking and making. I feel incredibly liberated and excited about the arrival of the next work. Watch this space.